“Through some of the panel discussions, the emphasis will be on re-engaging the past with its contemporary self. In effect—Punjab as protagonist in its own story—with a local and international focus for the 21st Century, which will hopefully include many more of its dreams and capabilities. The remaining core parts of the programme were developed out of a desire to open up avenues of dialogue in key aesthetic areas through either performance or discussions. These have an ephemeral quality, which works well with the ephemeral quality of the moving image. Hopefully, these juxtapositions will collide in meaningful ways.”

‘The Art Of Place / Then As Now’, a talk on Pierre Jeanneret’s Chandigarh at Panorama Punjab

Talk:  ‘The Art Of Place / Then As Now’
a talk on Pierre Jeanneret’s Chandigarh at Panorama Punjab
On Sunday 4 March 2018 at 1:00 pm
Open to public

About the event:
Panorama Punjab, an international forum for art and culture will hold its first edition this year at Qila Mubarak Patiala, Punjab. The festival directorate has invited Pro Helvetia New Delhi to host the talk ‘The Art Of Place / Then As Now’ on Pierre Jeanneret’s Chandigarh and the 18th century Sikh Fort which serves as the venue in the context of architectural histories of Punjab.

About the talk
Panorama Punjab is both an international platform and one where a Punjab-specific conversation can take place. The meeting ground between architecture of the different eras represents the ‘art of place’ with strong local and international interpretations, which vie for a hold in the present day. One of the highlights is the special focus on Pierre Jeanneret, the cousin of Le Corbusier, who made significant, though previously-less heralded contributions to the making of Chandigarh. The objective is to fete his style of architecture, and nudge him out of the shadows of his more famous cousin. The panellists include architectural historian and curator Maristella Casciato, from the Getty Research Institute, and Punjab’s own Gurmeet Rai. While the former is a renowned architectural curator and historian with expertise on Jeanneret, Rai is particularly knowledgeable about the fort, as she did her PhD on it. 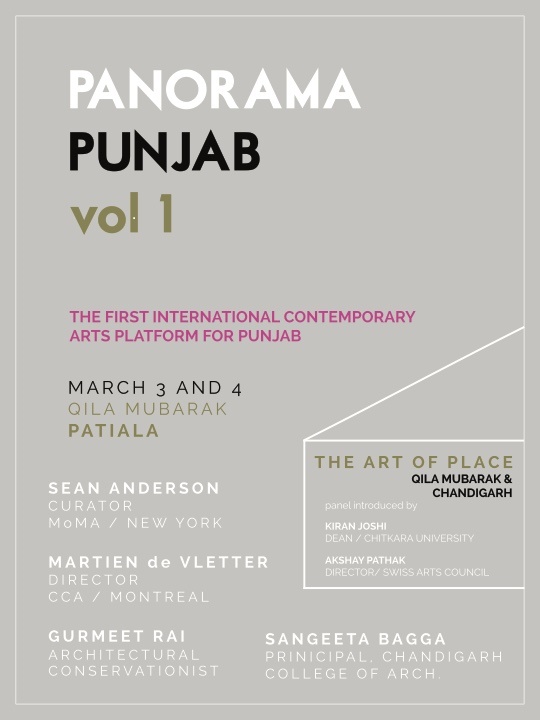