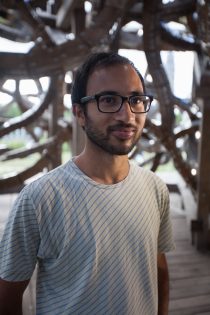 Artist and composer, Robin Meier Wiratunga tries to understand the emergence of thoughts and ideas, be it for people, animals, flocks, algorithms or rivers. With a bag of tricks from sound, science and sorcery he composes thinking tools he never quite manages to master.

His investigations have been conducted internationally, with partners including Palais de Tokyo, Centre Pompidou, Shanghai Biennale and Colomboscope Sri Lanka amongst others.

Robin is a collaborator at the sound research institute IRCAM in Paris. He teaches Sound Arts at the Academy of the Arts in Bern and is a fellow of the Istituto Svizzero Rome. He will be on a research trip to Mumbai from 17 December 2022 – 10 January 2023.

Robin’s project “Ghost Travellers” is a musical score for live pigeons, humans and the city soundscape of Mumbai. It composes with sounds produced by flutes carried by flying pigeons and patterns formed by the birds on public places. Airy sounds emerge out of a thicket of traffic noise, market clamor, and azans as random patterns coalesce into geometric symbols. Through working with local pigeon keepers, amateur brass bands, community events and video portraits this project will encourage encounters and amplify voices of participants in neighbourhoods of Mumbai that generally remain on the sidelines of the cultural industry.