What clamor and commotion, what a jumble of junk in Red and Blue’s workshop! Everything’s upside down. What happened? It isn’t so easy to follow a plan without an instruction manual, or even to communicate for our two fledgling mechanics. While Red and Blue are busy getting Robot working again and outdoing each other’s ingenuousness, objects come to life and mischievously act up.

The ThinkArts Festival for Young Audiences 2021 will present “Robot” by the Chamar Bell Clochette Company. Conceived as a performance halfway between an art installation and a concert of objects and electronic sounds, “Robot” evokes Monsieur Hulot’s lanky silhouette and burlesque gimmicks, and Jean Tinguely’s fantastic kinetic machines. It’s a construction game in the form of a scavenger hunt, titillating the imagination of young spectators and bringing Robot to life among a joyful hullaballoo of objects. ​

Robot was created in 2018 by musician Roland Bucher and puppeteer Chine Curchod as part of a carte blanche at the Mullbau in Lucerne. It is Curchod’s second experimental concert project using puppets, objects and electronic sounds, after Oskar in 2016.

​Robot is a poetic initiation to experimental music for the very youngest spectators.

Chamar Bell Clochette is a Swiss theater company with real people and real puppets founded in 2008 by Chine Curchod. After three successful creations for young audiences, the company also creates several small forms, thus bringing the company a more experimental aspect and also opening its universe to adult spectators. The company surrounds itself for these creations with a merry band of actors, directors, visual artists, illustrators, musicians, technicians, costume designers, who bring their skills and their madness to each project. The shows have the chance to go on tour through Romandie, German-speaking Switzerland and France in various venues and festivals.

ROLAND BUCHER, drummer and electro-experimental musician, was born in 1977 in Küssnacht am Rigi and is currently a drummer for the groups Blind Butcher and Kion. He earned a degree in drumming and a Master of Arts in music education from the Hochschule Luzern Musik in 2010. He has worked on a variety of theatrical projects, films and art installations. In 2015, he obtained the Förderpreis des Kantons Schwyz and the Werkbeitrag from the Canton of Lucerne in the pop/rock/electro category with Blind Butcher.

Chine Curchod, a performer and puppeteer, was born in 1980 in Geneva. After studying at Geneva’s Conservatoire d’art dramatique, Chine performed with a number of directors  in Geneva. In 2008, she founded her company, Chamar Bell Clochette. In June 2016, Chine collaborated with musician Roland Bucher. They created an experimental puppet-music performance for children, “Oskar”.  Chine has taught workshops for children and adults at Geneva’s Théâtre des Marionnettes since 2010, and is involved in various theatrical projects to initiate actors to the art of puppetry. In 2021, she received the National Prize of ASSITEJ.

The ThinkArts International Festival for Young Audiences was started in 2019 as a biennial festival to introduce children to plays and performance pieces from across the world, while also providing a platform to showcase some of the work being created by artists in India. 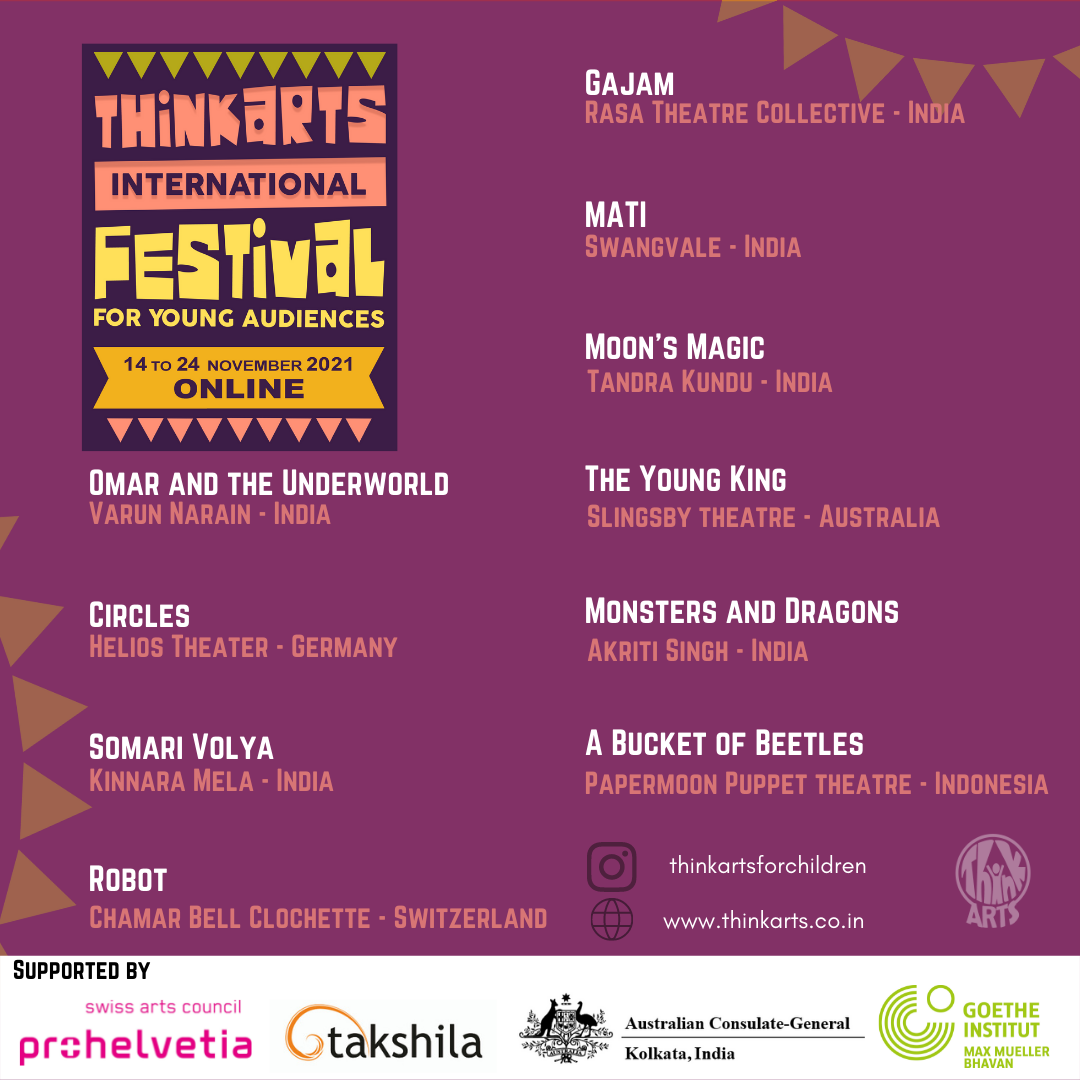