Gaming festival EyeMyth will showcase games from Swiss Indie gamers. The Swiss delegation will also be part of the Game Design conference and conduct workshops at the festival in Mumbai.

Charlotte Broccard is passionate about drawing and sees the practice of creating video games and interactive experience as a way to give life to drawings. Charlotte studied media interaction design at ECAL from 2013 to 2017, followed by internships at Kesselskramer and Random Studio in Amsterdam. Charlotte is back in Switzerland to continue with personal projects.

In a colorful and delirious universe with hand-drawn animations, the app TÊT is an introduction to Vietnamese cuisine, composed of a series of mini games that challenge the player’s sense of agility. This project started as a diploma work at ECAL. It is still a work in progress, with the programming help of Etienne Frank.

LuLuLu Entertainment‘s representative to EyeMyth this year is Aaron Abt, representing programming, sound design and game design of their fast-paced duelling game Bämeräng. Two players fight each other for the favor of a goddess. This dual is part of an ancient tradition performed by a primitive tribe inhabiting a colorful, outlandish world.

Tim Bürge and Aaron Abt started their Bämeräng prototype with GameMaker as part of a module during their game design studies. They’ve since won the Swiss Game Developers Association’s Junior Game Award in 2016, which has spurred them on to release the game as a commercial title.

Solarski Studio artist-game designer, author and theorist  Chris Solarski started work in video games at Sony Computer Entertainment’s London Studio as a character and environment artist before making a career-defining detour into figurative oil painting. The unusual mix of game art and classical art eventually resulted in authoring a disruptive sensory design framework that adapts traditional craft to video games and across interactive media (VR, AR, XR) with the aim of heightening physical empathy and embodiment. Chris has also authored two books on game art and design that are endorsed by the likes of Assassin’s Creed founding member, Stéphane Assadourian, and Cyberpunk 2077 level designer Max Pears. Chris’ work has been described as gaming’s equivalent to Robert McKee’s screenwriting classic, Story, and Joseph Campbell’s universal storytelling structure, which Chris has had the pleasure of presenting at the Smithsonian Museum’s landmark The Art of Video Games exhibition, Disney Research, SXSW, Google and FMX, to name a few.

Andres Bucher, studio co-founder and programmer at Black Spoon Games,  was always interested in Mayan culture, with a particular fascination for building and temple architecture and the complex and artful writing system. Inspired by the mobile game classic Snake, Andres developed the idea behind Kukulcan and reached out to former colleagues from the Zurich University of the Arts (ZHdK) to collaborate: Julia Bohren (a fan of myths) and Joëlle Tobler (a puzzle enthusiast), who will be at EyeMyth festival 2019.    Kukulcan is a mobile puzzle game where players slip into the role of Kukulcan, the Mayan snake deity. The deity can drop parts of its tail to create stairs, bridges, plug fountains and much more. This is a crucial feature to solve puzzles since only a limited length can be used in each level. Moveable boxes, lava lakes, teleporters and other exciting abilities challenge the player’s wit and creativity. 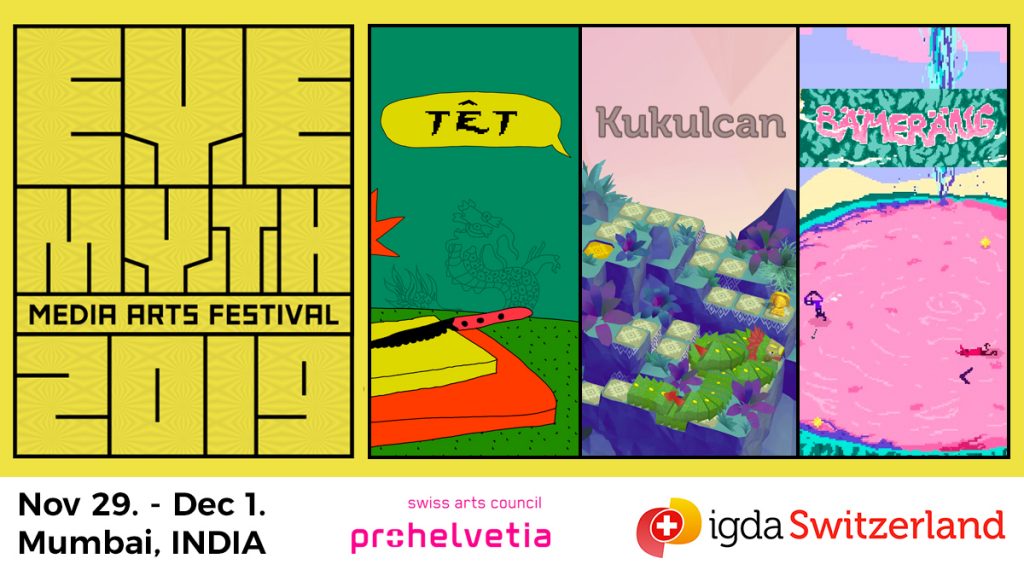