Theatre director Till Wyler Von Ballmoos will be in India during the festival for a research residency for Experimenta and for a performance workshop with the students of Srishti Institute of Art, Design & Technology.

Till Wyler von Ballmoos will be working on an artistic research project about the myth of Oedipus with the working title Oedipus Reconstructed. This project focuses on the well-known figure of Oedipus and questions the character and its myth within the context of India. The project will work together with a performance workshop at the Srishti Institute of Art, Design & Technology and the presentation of a performance essay at EXPERIMENTA Bangalore.

In his essay “What is it like to be a bat?”, Published in 1974, the philosopher Thomas Nagel discusses the difficulty of grasping the consciousness of one’s counterpart. What does a world look like if you only perceive it via the reflected sound waves of the echosounder?

Till Wyler von Ballmoos’s work revolves around the interplay between audience, performative spaces and live music and sound. The choreography of unstable events in performances and narrations of paradox situations are his artistic research focuses. He studied Music Theater at the University of Music and Theater Munich/Germany from 2006 to 2011 and classical violoncello at the University of Arts Bern/Switzerland from 1990 to 2004.

About Till Wyler von Ballmoos

Currently works in Germany, Switzerland, Denmark. His work revolves around the interplay between audience, performative spaces and live music/sound. The choreography of unstable events in performances and the creation of narrations of paradox situations has been one of his research focuses.

Since 2000 Till Wyler von Ballmoos has been working in theatre, music, film and new music theatre. His opera production “The Navidson Records” premiered 2016 at Münchener Biennale Munich/Germany as an Opera drawing on elements of both Art Installation and Music Theater with an ensemble of 20 artists and a choir. The production was the winning concept of the competition Plattform Neues Musiktheater (2014). At the Opera Stuttgart he created “Make Room – Take up Space” a performance with the public in public space (2016). As part of the venue Transform in Bern/Switzerland he developed an interactive performance with the public “till_paradise” (2015). He directed the critically acclaimed play “Dr Goalie bin ig” at KonzertTheaterBern Bern/Switzerland (2012 – 2018). With Teater Bloom Copenhagen/Denmark he created and staged the Music Theatre for children Jeg Mangler En Del (2013). At the Biennale Bern he created and directed the performative Installation “CARRILLO_N13¿” (2012) and at Badisches Staatstheater Karlsruhe in Germany he devised the myth of William Tell as the theater piece “Tell – Variationen” (2012). His devised theaterpiece “Das Schwarze Loch – The black hole” was presented at Kammerspiele München(2009). 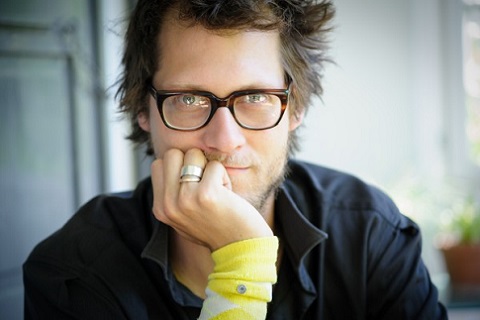 Till Wyler von Ballmoos has received awards including Best Directors at the National Festival for Theatre in Bamberg/Germany for “Der Tod und das Mädchen – Ein Wiederhall” for which he was also nominated Best Director at Körber Studio Junge Regie Hamburg/Germany (2011).

From 2003 – 2007 he composed Music for feature films including the original sound track for “Das Fräulein” (by Andrea Staka), the winner of the Locarno Film Festival, Sarajevo Film Festival, Premio Fipresci, in 2006 and the original sound track “Slumming” by Michael Glawogger, nominated Best Movie at Berlinale 2006. His compositions were also awarded with the Film music prize of the State of Bern/Switzerland. As a live musician he has performed with several artists and musicians, such as Georges Aperghis, Pauline Oliveras and Pierre Favre.

He is the founder and artistic director of the artist-group 5 FREUNDE. Between 2003 and 2006 he was the artistic director of the Werkstatt für Improvisierte Musik (WIM) in Bern/Switzerland and the Musikfestwochen Bern/Switzerland. He was a resident fellow of Akademie Schloss Solitude Stuttgart/Germany and a resident fellow of Inteatro Festival Academy Polverigi, Ancona/Italy. He has received multiple scholarships and grants for his artistic work.